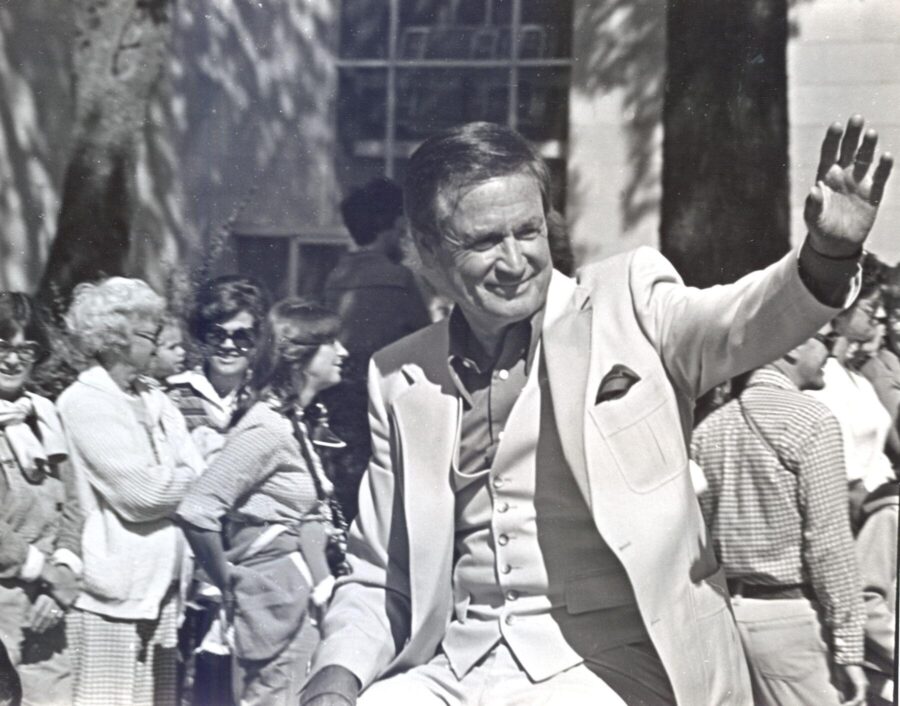 Bob Barker was born in Darrington, Washington on December 12th, 1923.  He spent most of his childhood on the Rosebud Indian Reservation in Mission, South Dakota, where he was listed as an enrolled member of the Sioux tribe. His family moved to Springfield, where Barker graduated Central High School and attended Drury University on a basketball scholarship.  He joined the Navy Reserve in 1943 to train as a fighter pilot for World War II, but never saw active duty.  He married his wife, Dorothy Jo, while on leave in 1945.  After the war, he returned to Drury to finish his education and graduated with a degree in economics.

While Barker was studying at Drury, he got his first media job at the KTTS Radio Station in Springfield, which operated out of the Gillioz Theatre.  He and Dorothy Jo later moved to Florida where he worked as a news editor and radio announcer, before eventually moving to California so he could pursue his broadcasting career.  He got his own radio show, The Bob Barker Show, which ran for six years.  Eventually, a game show producer happened to hear the show and thought Barker would be a great replacement for Jack Bailey on the long running game show, Truth or Consequences. Barker hosted the show from 1956 to 1975.

In 1972, Barker began hosting the CBS revival of The Price is Right.  While working on the show, he became one of the first MCs of any major show to wear his hair in its natural gray, as most hosts of the time would dye their hair.  He retired in June of 2007, and made three return appearances to the show after his retirement.  First to promote his autobiography, then for his 90th birthday, and finally on April 1st, 2015, as an April Fool’s prank.  In each of these appearances, he would open the show and host for a bit before returning the mic to current Price is Right host, Drew Carrey.

In addition to being one of the longest running television hosts in America, Barker is an outspoken animal rights activist.  He has been a vegetarian for over 30 years, and beginning in 1982 he would end each episode of The Price is Right by asking viewers to spay and neuter their pets.  He was a long time host of the Miss USA pageant, and historically some of the prizes included furs for the placing contestants.  Barker requested that furs not be given to the winners, and when the producers refused, he stepped down as host. In 1994, he founded the DJ&T Foundation, which funded animal neutering programs, as well as parks and animal rescue services.  The foundation is named in honor of his late wife and his mother.  In 2010, the Sea Shepherd Conservation Society named one of their ships The Bob Barker, which was secretly purchased and outfitted to stop whaling operations in the Southern Ocean of Japan, thanks to a charitable donation from Barker.  Most recently, in 2012, PETA’s newly renovated office building in Los Angeles opened, to which Barker had donated $2.5 million.

A staple of American television, Barker has been awarded 19 Daytime Emmy Awards, the Lifetime Achievement Award at the 1995 Daytime Emmy Awards, was in the 2004 class of Television’s Hall of Fame, and was named Time Magazine’s Greatest Game Show Host of All-Time.  At the time of this article, Barker is still in good health and will be celebrating his 99th birthday in December 2022.